When You’re Mine by Layla Hagen Releasing June 8th 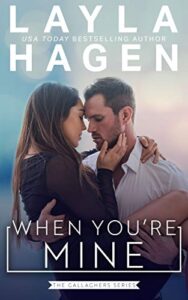 Dylan Gallagher knows what he wants: to take New York by storm and steer clear of serious relationships. That’s the plan. That’s the goal. It’s easy too, now that his software company is making headlines. Nothing is getting in the way of that—not even his gorgeous personal trainer. After the way his last relationship ended, Dylan’s sworn off romance.

Mel keeps talking him into doing things, like watching the sunset and slowing down to enjoy life. Her smile is addictive, and so is her permanent sunny disposition.

When she trains him and he watches her body, he’s constantly fantasizing about exploring every inch of it all night long, claiming her mouth every time she gives him a sassy reply.

Mel Dawson hasn’t had an easy life. Between her Dad’s sickness and her ex ghosting her after she loaned him money, she’s faced a few challenges. But she loves looking on the bright side of life and she’s determined to get Dylan to do the same.

Dylan is used to taking risks in the boardroom, but not in his personal life. How much is he willing to risk for a chance to make Mel his?

The Fling by M. Robinson Released May 25th 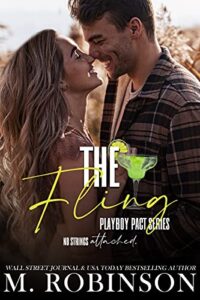 What happens when you make a pact with your boys to stay single and never fall in love?

Well, you get the Playboy Pact.

I was the playmaker. The one with the best moves, the best lines. I was the best at everything…
And I mean, everything.
There was no woman immune to my charm. To my looks. To my bed-hopping ways.

It was supposed to be easy. A quick, fun, mind-blowing night where she screamed out my name in ecstasy.

No feelings.
No past.
No strings attached.

I fell for her smile.
Her laugh.
Our instant connection.
Except, I never expected to fall in love.

Especially with a single mom…

Tie Me Down by Melanie Harlow: Released May 24th 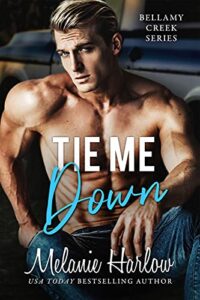 Just friends.
That’s all Beckett Weaver and I have ever been.
Sure, he’s a hot cowboy who left Wall Street behind to take over his family’s ranch. Yes, I’ve had a secret crush on him since we were seventeen. And who wouldn’t appreciate those strong hands, that massive chest, and the way he fills out a pair of Levis?
He makes a girl sweat just looking at him . . . and I look. A lot.

But I’m a single mom trying to move on with my life, and he’s running that ranch single-handedly while taking care of his elderly father. We don’t even live in the same state. I only returned to my hometown of Bellamy Creek to sell my late mother’s house, and he just invited me and my son to stay with him because he’s got a big heart.

That’s not the only big thing he’s got–which I discover the night I finally sneak across the hall to his bedroom and shed my inhibitions right alongside my pajamas. And once we give into each other, we can’t stop.

The hayloft. The bed of his truck. The dock by the pond.

Nothing has ever felt so right, but his past has taught him not to believe in happily ever after, and every perfect night I spend in his arms brings us closer to goodbye.

Like any cowboy, he’s good with a rope and knows exactly how to tie me up.

But what if I want him to tie me down? 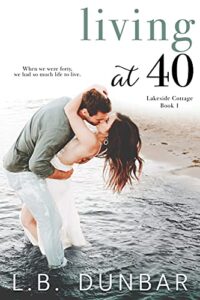 Is it an accidental pregnancy, if it’s purposefully planned?

Autumn Kulis wants a baby. It’s that simple and that complicated, because one thing stands in her way – she doesn’t have a man in her life. And at almost forty, she isn’t getting any younger. On a two-week trip to her brother’s lakeside cottage, a plan forms. Make a list of three men. Sleep with each of them. Allow nature to take its course. Only, a certain someone gets in her way.

Logan Anders goes with the flow of life. Divorced, single dad, he works hard, and occasionally plays harder. When his college roommate invites him to Lakeside Cottage for two weeks, he hadn’t remembered his best friend’s little sister being so hot. Nor was he a fan of her plan to find a baby daddy. He’s determined to make her list, then tear it to shreds leaving him the only man horizontal with her.

When we were forty, we had so much life to live, and a simple proposition could be the start of a second chance at really living.

It’s The Big Chill of 2021, including a reunion of friends gone awry when someone wants to get pregnant and someone else wants to be the one to give her everything.

Welcome to Lakeside Cottage, a new adventure in over 40 romance and second chances at love by L.B. Dunbar. 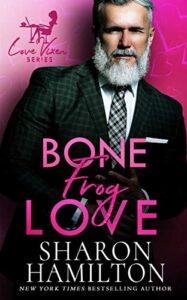 ♥️The Navy SEAL and the Cupcake Girl♥️
Dear Love Vixen:
I’m flirting with this guy who is almost as old as my dad. I mean, he’s hot as hell, and he’s a real man, not like the boys I’ve been dating lately. Is this wrong? I know, I know. I need to find out if he’s married, or with someone first, but he wants to take me out on a lunch date to discuss. Should I go, or nip it in the bud? I can’t stop thinking/dreaming about him. ♥️Cupcake Girl♥️

Dear Cupcake Girl:
Nip it. Nip it. Nip it. Until you know what you’re dealing with don’t get your heart involved. Don’t listen to those naughty girly parts until you know he’s single and available. And by available, I also mean emotionally. Then decide what you want from him and what’s best for you. Which may or may not be the same thing.
Good luck, hon. XOXO
The Love Vixen ♥️

And From a Navy SEAL:
“From the first moment I saw her I envisioned slapping frosting all over that cute little cupcake at the Baby Cakes bar. When I close my eyes, I’m dribbling warm chocolate sauce, powdered sugar, silver balls and sprinkles all over her body parts and then…OMG I shouldn’t be even considering dating someone so young. But I’m newly single now and this sweet young thing seems like just the right person I could take another bite out of love with. I’ve weathered the marriage storms and served my country well for twenty years. Isn’t a former Navy SEAL allowed a little fun?” 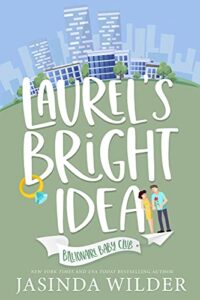 Laurel McGillis has a secret: she’s a hopeless romantic. She’ll deny it up one side and down the other, and all evidence points to the contrary, but it’s true. Her deeper secret: she’s desperately hoping to be the third victim of The Ad. In this case, Laurel’s two secrets are about to cross paths, in the steamiest, most romantic way she could possibly imagine. 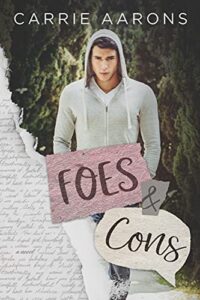 Sawyer Roarke was my best friend.

Growing up, our families were inseparable. We spent summers vacationing at the beach. In the school yard, it was us against the world. Then puberty hit, and we skated the thin line of staying buddies, or becoming more.

Until I accidentally found the pros and cons list he made about whether or not to date me. And there were definitely more bullet points on the no side. Acting out of rage and hurt, I embarrassed him in the most public way possible. Now, we’re enemies.

We’ve spent the last two years tearing each other to pieces. Everyone knows that Blair and Sawyer hate the ground the other walks on, and unfortunately, I got the unpopular end of the stick while he became Mr. Prom King.

Until senior year starts, and I’m tired of running scared. For the first time ever, I stand up to the golden boy with the whip-smart tongue. As the challenges and dares pick up speed, hearts start to fall and feelings get entangled. Despite my initial discovery, I wonder if being caught by each other wouldn’t be so bad.

Except Sawyer has no idea what I found all those years ago. And if the truth comes out about why I pitted us against each other, not only will he add one more con to his list … but he can add my broken heart as well. 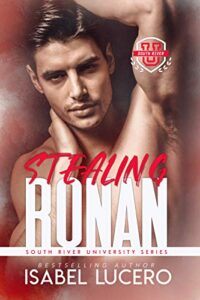 Stealing Ronan wasn’t the plan. I’d never imagined I’d steal a boyfriend from my sister, but when I saw him strutting to my couch with his perfect body, gorgeous face, and that mouth—God, that mouth, it was like he was plucked from my wettest dreams and brought into my life just for me.

Lusting after a straight guy who’s dating my sister is a problem in itself, but the bigger problem comes when he’s invited on a family trip with us for Christmas. Just as I thought I was doing a pretty good job ignoring his soft lips and curious gazes, we’re hit with a furious blizzard, leaving me and Ronan locked up together. Alone.

We’re only snowed in for two days, but things heat up quickly, because it turns out I’m not the only one with a fascination.\