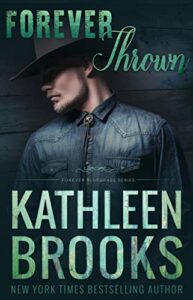 Everything Porter Davies has worked for is about to be ripped away from him with one throw from a rodeo horse. The hits don’t stop there, either. He’d known they’d come for him one day. His father had been the best spy back in his day and they’d been keeping tabs on Porter since he was eighteen. “It’ll be just one job” they tell him now, but it’s never that simple when the one job is Willa Alderidge.Willa Alderidge’s father is one of the most famous tech geniuses in the world, but Willa was never one to sit back and take what she didn’t earn. She worked hard to graduate at the top of her class and fought her way up the corporate ladder to become the vice president of her father’s company. The one place she found solace was show jumping. Out there, she wasn’t an heiress and her ability wasn’t constantly questioned. Instead, she was just another jumper. Until one day everything in her life changed.An unknown man threatens Willa and those she loves for access to her company’s confidential and powerful technology. She thinks everything she’s worked so hard for is lost when faced with a no-win scenario unfolding around her. That’s when Porter Davies falls into her lap, literally. Can a rough rodeo rider and an elegant show jumper join together to save more than each other? 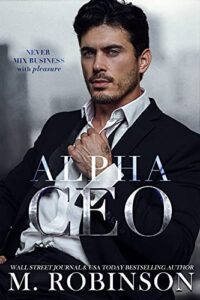 I came from nothing and made something of myself. I’ve only ever loved two things. Cars and her.

I took that passion and built an empire.

On top of the world.

I’m not the carefree man she once knew.

That was the problem with being one of the richest men in the world—everyone thinks they know me, but they only know what I want them to.

My company thinks they can change me. Soften my image. Make me more appealing to the public.

Little do they know, the woman they hired was my best friend’s little sister, and the last time I saw her… 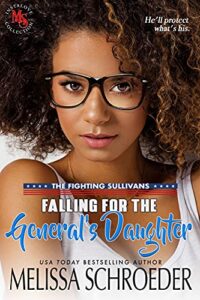 When Raine Sullivan takes on an assignment, he has no idea he’s going to meet the woman of his dreams.

I’m the brother who likes to play pranks, to keep everyone laughing. But it isn’t a joke when I go to work for Sullivan Security, and especially when my old mentor and family friend General Allen needs my help. It seems his daughter has caught the attention of someone who has been cyberstalking her. I take the job without a second thought, remembering the sweet, slightly nerdy preteen I met years ago.

Only, she isn’t a preteen anymore. She’s beyond beautiful and brilliant. Another thing, geeky girls? They are sooo my thing. Not to mention, she has a wicked sense of humor, and while she seems sweet, she can cuss better than any Sullivan brother.

But coming onto her while I’m on the job would be unprofessional and besides, her father might just kill me. And he can do it. I know his history and there’s a reason he has enough medals on his chest to sink him to the bottom of the ocean.

As the cyber stalker goes into overdrive, we begin to spend all of our time together, and while I said I would resist seducing her, I didn’t say anything about not letting her seduce me. 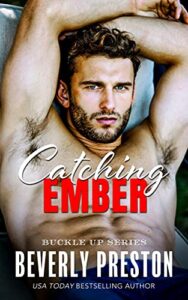 They say everything’s bigger in Texas—including Nash Harris’s ego. Falling for a man like Nash was easy. The man’s an addictive dance of dominance, intellectual conversation, and hidden scars. If she isn’t careful, she’ll let him rob her blind like a welcomed thief stealing pieces of her heart, hiding them in his pocket next to her panties. 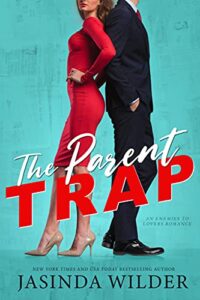 He was my worst enemy. He spent every waking moment devising fresh new ways of torturing me. No one has ever been able to make me cry like Matthais Bristow: my twin brother’s best friend, and the person on this planet I hate most.

Now, he’s back, and he owns half of the family business I spent my entire life preparing to take over.

Is this going to be a new round of his old favorite game, Make Delia McKenna Cry, or am I to believe he’s actually come back with good intentions?

Loving A Landon by Ruth Cardello: Releasing on August 24th 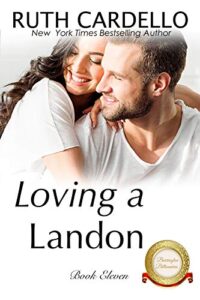 Benjamin Drover thought he’d found love until his wife joined the Marines and was killed in action. He’s spent the last year, hating everyone—including himself. On the anniversary of his wife’s death, he receives a letter from her asking him to donate her entire inheritance to the Landon Foundation.

He’s angry with her for leaving, angry with himself for not moving on, and driven beyond fury when the always irreverent Clay Landon refuses the donation.

Born to one of the world’s wealthiest families, Clay’s sister, Caterina has had anything but an easy life. After losing her parents and one of her older brothers, the ultimate betrayal came from Clay himself. What he did to her, how she suffered because of him, was something she is still recovering from. She doesn’t regret walking away from her inheritance, but she is tired of the past controlling her. It’s time to face it, face Clay, and finally begin to heal.

Her whole life is upside-down. It’s definitely the wrong time to meet the right man.

Caterina’s pain tears through Benjamin’s anger. He wants to help her, but first, he must heal his own wounds. To keep her, he’ll need to become the man he always should have been.

This time, when the woman he loves announces she’s going to battle—he’ll go with her.

And if Clay Landon survives, he just might get to play Fairy Godfather one more time. 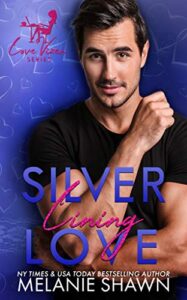 Six months ago, my life changed forever, and I had no idea it was coming.

My sister—the strongest and most selfless person I’ve ever met and the kickass mom to three adorable kids—was killed in a car accident.

In an instant, I became the mom to those three adorable kids, and lemme tell ya…I am far from strong. Or kickass. In fact, up until that night, I was a party girl who never worried about anything deeper than my plans for the weekend. I’m not equipped for this—especially since I lost the person I would’ve normally leaned on in this situation!

To say I’ve been flailing would be an understatement.

There has been one bright spot in the messy-house-late-to-school-bedtime-chaos darkness, though.

He comes over pretty much every evening, and spends almost the entire weekend at our place. Every weekend. He’s amazing with the kids, which isn’t surprising considering he’s the second of nine siblings and helped to raise the younger ones.

That’s kind of the problem, though. He’s always said he never wanted kids. That his childhood burned him out. That it was a dealbreaker.

So, even though the sparks are flying so fast and furious it feels like they could burn the house down (which, to be honest, with the year I’ve had, a burned-down house would pretty much fit), I don’t feel safe trusting those sparks.

Or the look in his eyes when he turns to me. Or the soft smile on his face when he watches me with the kids.

I would’ve asked my sister about this, so I’m asking you instead. And I’ve gotta warn you, those are big shoes to fill. But I trust you!

So, Love Vixen—is there a chance that a newly-reformed party girl, a guy who swore he’d never have children, and the three kids neither of them ever expected to land in their lives can come together and make an unconventional but happy family?

(Not to tell you your job or anything, but PLEASE SAY THERE IS A CHANCE!)

Sweetie, I wish I could give you a hug and tell you what you want to hear. Let’s unpack your question a bit and break it down. What’s your reason for crushing on him?

With all you’ve been through it would be easy to confuse dependency and loneliness with love. Does he make your heart race because of his babysitting skills or does the man behind the child whisperer do it for you? That’s something only you can answer. Neighbor guy sounds like a very caring and nurturing friend. A person can’t turn those traits off. I bet if you found the answer to why he doesn’t want a family of his own you might discover the chance you want with him.

You’ve done an incredible thing by stepping up and giving those precious children love and stability during a very scary time in their lives. Be just as kind to yourself. Seek your own happiness, even if it’s not waiting for you just outside your door. 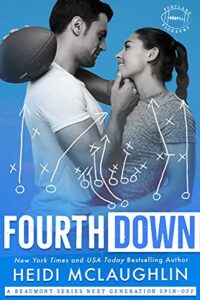 Autumn LaRosa has been playing defense since the moment she met Julius Cunningham. After accepting a position as a meteorologist in Portland, she strives to make a good first impression. Then she meets the arrogant wide receiver who belittles her in front of her new friends. She could have walked off the sting of his bitter words, but he keeps showing up in her social circle.

Now, she is determined to meet him at the line of scrimmage and prove she’s not one to back down.

Julius Cunningham is well aware there’s a flag on the play after his harsh words to Autumn. The more he sees of Portland’s new weather girl, the clearer it becomes his judgments of her were unfounded.

But how can he call a timeout on the animosity he created?

When Autumn attends a charity event with the Pioneer players, she sees an opportunity too tempting to resist. Julius looks miserable being a part of the date auction, making it even more fun for Autumn to bid. Will she use the opportunity for some good old-fashioned payback? Or will this be their fresh start at the twenty-yard line?

Get ready for the snap and sprint for the end zone because Autumn and Julius are headed for either a tackle or a touchdown!

Because You’re Mine by Layla Hagen: Released August 3rd 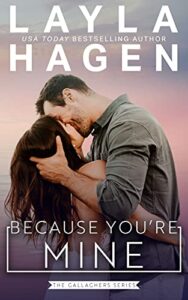 This sexy and heart-warming romance about a sworn bachelor falling for his best friend’s sister will melt your e-reader. Happy Ever After – guaranteed!
Can be enjoyed as standalone.

Ian Gallagher loves taking risks. It’s how he turned the business he’s built with his brother into a success. But even he can’t cross some rules. His best friend’s sister is strictly off-limits, but when Ellie moves to New York, he jumps at the chance to help her settle in.

One look at her, and he realizes that not flirting with her will be a lot harder than he thought, and not just because she’s stunning. He enjoys her laughter and merciless teasing. How can he stay away when all he wants is to get closer?

Ellie Cavanaugh is living her dream. She’s finally working in a Michelin starred restaurant in New York. Her plan is to get as much experience as possible before opening her own place. Kissing her brother’s best friend is definitely not part of the plan. Neither is opening up to him in ways she never did with anyone.

Ellie knows that Ian isn’t looking for forever though. After all, her brother warned her that Ian was a sworn bachelor. And if she’s honest with herself, Ellie isn’t ready for love either. She’s never let anyone in before. But she can’t help giving in to the growing bond between her and Ian, even if it means putting her heart on the line.