Notice: Constant WP_DEBUG_DISPLAY already defined in /var/www/wp-config.php on line 97
 Rise of the Billionaire by Ruth Cardello
Skip to content 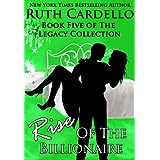 Jeremy was a man who wanted to change who he was to impress a woman. Danger and power was what she craved so that was what he sought out to be and have.

With the help of an image consultant, Jeisa, he reached that and some. He was not banking on his love for Alethea to be nothing but lust for a childhood obsession. What his body and life really needed was the one woman who he could confide in, laugh with, be himself around, and also who washis best friend, Jeisa. Being given one week to make his choice before she move on after confessing her love, Jeremy took action. There where bumps and bruises but in the end they found their way.

Ruth is the queen of powerhouse players on the cutting edge of technology when it comes to books and she did not waver on the crown. I was in awe of the storyline and turn out of the book as well as the comic relief as well. I was happy my honey Dominic was still his loving badass self and Jeremy’s self proclaimed mentor.This was one if my favorite stories in the series. Batman, Batman, and Robin will be at it again.

I give this book 4 1/2 ♡’s and am waiting for the next. So as you wonder or think when in a rutt just say WWDD? What Would Dominic Do?

Jordyn's Army
by Heidi McLaughlin
Fighting For Our Forever... Baby Style by Heidi McLaughlin This was a pure comic relief of Jamie and Ajay road to delivery. How family is not always blood but those who accept you and love you just the same." Pure Rose by Kathy Coopma...

Flame
by Chelle Bliss
If I could get away with writing a review full of curse words, I would. Pike and Gigi, more please. This book was written in pure Men of Inked form... maybe just a tad better because it had it all. Chelle channeled every book in this s...

Dare Me Tonight
by Carly Phillips
Be Careful Finally.... The Broady brother is no more. The little spitfire of the youngest Dare has captured him and brought back the man he once was. This was a fun read of a second spark that was stronger than the first.

99c SALE!!! Bad Company by S.L. Sterling is only 99c for a limited time + FREE in Kindle Unlimited!!! “A definite 5 star read! I was hooked from the very first page.” – Goodreads reviewer “a perfect forbidden stepbrother/enemies to lovers romance… fantastic read” – Goodreads reviewer “The storyline was brilliant and the characters were amazing” – Goodreads reviewer Amazon: amzn.to/3b36GbV Add to your Goodreads TBR ➩ bit.ly/3h22SeW LoganFrom the moment we met, I despised Leah as much as she hated me. It only made matters worse when my mother became involved with her father. So, ten years ago, I moved away. But when I come back for the big anniversary party, the rivalry has disappeared and we're being congratulated for putting aside our differences. What they don't know is that if I get my way, tonight we'll be sharing a room…LeahFrom the moment we met, I did everything to get Logan's attention. All that he'd direct toward me were mean pranks often leaving me in tears. Even when he left for ten years, I still tried to get his attention. It took me a long time before I finally gave up. When Logan shows up unannounced for the big anniversary party, I expect the worst case of rivalry yet, but instead, we're actually getting along, and everyone is thrilled. And when I end up finding out the truth of why he is back, it shocks me to my core From USA Today Bestselling Author S.L. Sterling comes this steamy slow burn romance guaranteed to make you want more. ... See MoreSee Less

Are you a #KindleUnlimited subscriber? Check out this deal on the Kindle Paperwhites#waterproof #50percentoff #bookloversAmazon: amzn.to/33cogGj ... See MoreSee Less

Ending my night with Foes & Cons by Author Carrie Aarons Available on Amazon.... amzn.to/33mkA4ZSawyer Roarke was my best friend.Growing up, our families were inseparable. We spent summers vacationing at the beach. In the school yard, it was us against the world. Then puberty hit, and we skated the thin line of staying buddies, or becoming more.Until I accidentally found the pros and cons list he made about whether or not to date me. And there were definitely more bullet points on the no side. Acting out of rage and hurt, I embarrassed him in the most public way possible. Now, we’re enemies.We’ve spent the last two years tearing each other to pieces. Everyone knows that Blair and Sawyer hate the ground the other walks on, and unfortunately, I got the unpopular end of the stick while he became Mr. Prom King.Until senior year starts, and I’m tired of running scared. For the first time ever, I stand up to the golden boy with the whip-smart tongue. As the challenges and dares pick up speed, hearts start to fall and feelings get entangled. Despite my initial discovery, I wonder if being caught by each other wouldn’t be so bad.Except Sawyer has no idea what I found all those years ago. And if the truth comes out about why I pitted us against each other, not only will he add one more con to his list … but he can add my broken heart as well. ... See MoreSee Less